Two of our longest residents, Sonjie and Choco, entered VAO only four days apart, and patiently waited the long eight months before both finding their forever home in the last weeks of summer. 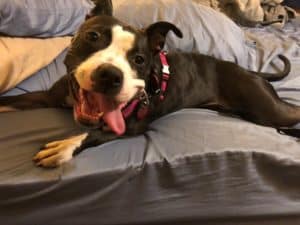 Paul Petrella, a Cherry Hill resident, always knew about VAO, but it wasn’t until he decided to find a female companion for his dog Bo, a three-year-old pitbull, that he actually visited the shelter.

Sonjie, a two-year old pitbull and boxer mix, was in the very last kennel and had a less than warm welcome for Paul.

“She was barking and growling at me, and I was ready to walk away just like most people would,” said Paul. “Rich, a staff member at VAO, started talking to me about her and was petting her through the kennel. She responded nicely, and I started to understand her story a bit more.”

Sonjie had previously been a long-term resident at the Almost Home Animal Shelter when the VAO stepped in on February 8, 2019 to see if a new setting would help her chances of adoption. Sonjie then endured a stay of 8 months at the VAO. She was wary about strangers, and for good reason.

Paul and Rich took Sonjie outside, where she showed her playful and affectionate side. Taken by her demeanor, Paul adopted Sonjie on September 14, 2019.

A Chance for Choco

Kelly Carman, a resident of Burlington, was on a mission to find the perfect companion for her dog Woody, a 10-year-old yellow lab. After seeing VAO’s social media posts, Kelly made a visit.

“There were so many dogs at the shelter, but I knew I wanted a dog that was a little bit older and quieter,” said Kelly. “All the other dogs that day were barking in their pen, but Choco was silent.”

Much like Sonjie, Choco, a six-year-old pitbull, boxer and lab mix, waited a long time for his forever family. He had been one of the longest residents at the ACCT Philadelphia, living on borrowed time, before being brought to the VAO on February 4, 2019 to help him find a permanent residence. Once at VAO, Choco stayed for 8 months.

After meeting Choco, Kelly’s heart melted. “He had been in and out of shelters for most of his life, and because of that, he’s very selective about what dogs and people he likes. I wanted to give him a chance to warm up to us.”

After a successful meet and greet with Kelly’s daughter and Woody, Choco went home on September 28, 2019 – exactly two weeks after Sonjie. 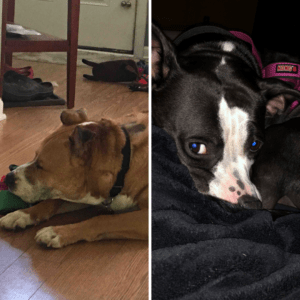 After more than 8 months of shelter life, both Choco and Sonjie have adjusted well in their respective homes.

Choco loves going on walks, playing with Woody and cuddling. He’s learning manners and a few additional house rules, like how to signal when he needs to go outside and which toys are his to play with.

“Navigating a house is different for him. He’s been in shelters for most of his life, so we know it may take some time to fully get into his routine.”

Much like Choco, Sonjie is a fanatic for cuddles and is most happy when she is nestled in the covers of the bed. At home, she is learning how to play fetch and working on her relationship with Bo.

“I’m mostly keeping Sonjie and Bo separated while they get familiar with each other,” said Paul. “They’re both high-energy, so easing them into their living situation is best for the both of them.

Despite the separation, Paul finds ways to bring the whole family together.

“I have a dog walker who will take one, and I’ll take the other, and we work on building the relationship between them. With time, they’ll be just fine.”

VAO has been doing its part to make sure every animal is safe and comfortable while they wait for their forever home. The shelter is currently under construction for their new facility and raising money for their capital campaign, “Building for a Pawsitive Future.”

Both Paul and Kelly are grateful for VAO’s commitment to the animals. If VAO hadn’t cared for Sonjie and Choco as long as they did, the dogs wouldn’t be where they are today – happy and healthy.

“VAO genuinely cares about the well-being of these animals. They don’t put a time frame on how long the animals can be there,” remarked Kelly. “It’s not just a cement room for the animals,” added Paul. “The staff works with them to make sure they are the best version of themselves.”

If you want to help save other animals like Sonjie and Choco, consider donating to VAO’s capital campaign, “Building for a Pawsitive Future.”

VAO is getting ready to bark and roll at its 23rd Annual Woofstock Festival, a dog-friendly event open to the public featuring dog demonstrations, delicious food and, of course, music.

As VAO’s largest fundraising event of the year, proceeds support medical care, pet food and supplies for the community shelter’s dogs and cats.

END_OF_DOCUMENT_TOKEN_TO_BE_REPLACED

There are more than 100 animal shelters in New Jersey – all with the mission of saving lives. But at the Voorhees Animal Orphanage, we like to think that we stand out from the pack. Here’s how:

1. All are welcome at our shelter

END_OF_DOCUMENT_TOKEN_TO_BE_REPLACED

The road to second chances is never easy, but it’s almost always worth it. That’s something Denise Christinzio of Gloucester Township knows well.

END_OF_DOCUMENT_TOKEN_TO_BE_REPLACED

Check out some excerpts from South Jersey Magazine’s latest profile on VAO!

END_OF_DOCUMENT_TOKEN_TO_BE_REPLACED

Voorhees Animal Orphanage (VAO) is celebrating “Adopt a Shelter Cat Month” throughout the month of June by encouraging area residents to visit the local community shelter and adopt a “furry friend.”

END_OF_DOCUMENT_TOKEN_TO_BE_REPLACED

Have you ever heard the phrase, “Not all superheroes wear capes?” The sentiment applies closely to our volunteers at Voorhees Animal Orphanage (VAO). Our small, but mighty group of volunteers go above and beyond to save animals and make sure each one is safe, loved and cared for until they go to their forever home.

An example of the heroic effort at VAO is Eileen Stukas of Atco, NJ. Eileen first became involved with VAO in 1995.

END_OF_DOCUMENT_TOKEN_TO_BE_REPLACED

Check us out on SNJToday!

At Voorhees Animal Orphanage, the sentiment, “I get by with a little help from my friends” often applies to our daily operations. Our small, but mighty staff of volunteers is essential to our work and make all the difference in the lives of our animals.